At a meeting held between the governor Jose Ignacio Peralta Sánchez and the general director of the Integral Port Administration (API), Salvador Gómez Meillon, on the occasion of his recent arrival to the position, they agreed to continue with a coordinated work and a common agenda.

Secretaries of the state cabinet presented various strategic projects of various companies that intend to invest in the new port, as well as port-city infrastructure works by the head of the Ministry of Infrastructure and Urban Development, José de Jesús Sánchez Romo.

At the meeting there was total openness to work as a team and wide availability so that a large part of the joint projects come to fruition, which the Director of Integral Port Administration described as viable.

Meanwhile, the Ministry of Economic Development, through its head, Walter Oldenbourg Ochoa, agreed work meetings to analyze the investment, development and promotion projects of the port-city. 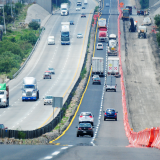